Full Name
Dave Hatz
Job Title
Director of Application Development
Company
AVI Systems
Speaker Bio
Dave Hatz has been a leader in the audiovisual technology industry for nearly two decades. Hatz is currently Director of Application Development for AVI Systems, and leads a team of developers in applying BI and AI to data gathered from meeting spaces, communication platforms, and the infrastructure which supports them.

Throughout his career, Hatz has been involved in designing and programming systems for hundreds of clients throughout the world. As the only programmer to hold the top programming certification from both Crestron and AMX, he has a proven ability to focus on the experience of the end user, and to keep technology from getting in the way of the business objectives which bring the user and the technology together.

Hatz is a frequent contributor to AVNation's AVWeek and A State of Control podcasts, and was recognized as a one of Commercial Integrator’s 40 Influencers Under 40 in 2016. He also contributes his time teaching AVIXA CTS-D and CTS-I courses as part of AVI Systems’ commitment to continued education for employees, clients, and even competitors. When he finally takes off his technical hat, Hatz can be found volunteering his time with Habit for Humanity.
Speaking At
Combined Session: Lessons Learned 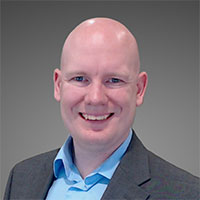