Dutta joined Peerless-AV (formerly Peerless Industries) in 2006 and worked in a variety of marketing roles, including tradeshow and events manager. In this position, Dutta produced some of Peerless-AV’s most successful tradeshows, resulting in the highest sales leads secured at an event. Dutta also developed a new booth design for the company’s many tradeshows and spearheaded major product marketing launches.

Before working in the audiovisual industry, Dutta worked as a meeting planner for the National Brownfield Association, where she both planned and marketed real estate industry meetings.

Dutta has been an active supporter of the AVIXA's InfoComm Exhibitor Committee since 2007; she chaired the committee for the 2017 show, a prestigious honor that allowed her to provide leadership and support to both the InfoComm tradeshow and its exhibitors. Dutta has been a member of InfoComm's Exhibitor Committee since 2007, and a member of InfoComm’s Exhibitor Advisory Steering Committee since 2011. She is also a member of Women in Consumer Technology and the AVIXA Women's Council. Dutta was featured in Dealerscope's 2017 40 Under 40 and is the recipient of AVIXA's 2017 Young AV Professional Award. At CES 2018, Dutta was honored with Women in Consumer Technology's Woman to Watch Award. Dutta is co-founder of Women of Digital Signage, an organization designed to provide a pathway to promote networking, mentoring, and personal growth.

Dutta holds a B.A. in Integrated Marketing Communications and an Executive Certificate in Hospitality & Tourism Management (Events), both from Roosevelt University; she is a Certified Digital Content & Media Expert. In her spare time, she enjoys traveling, photography and hiking. 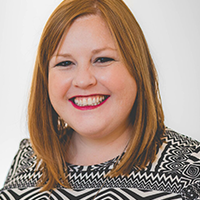